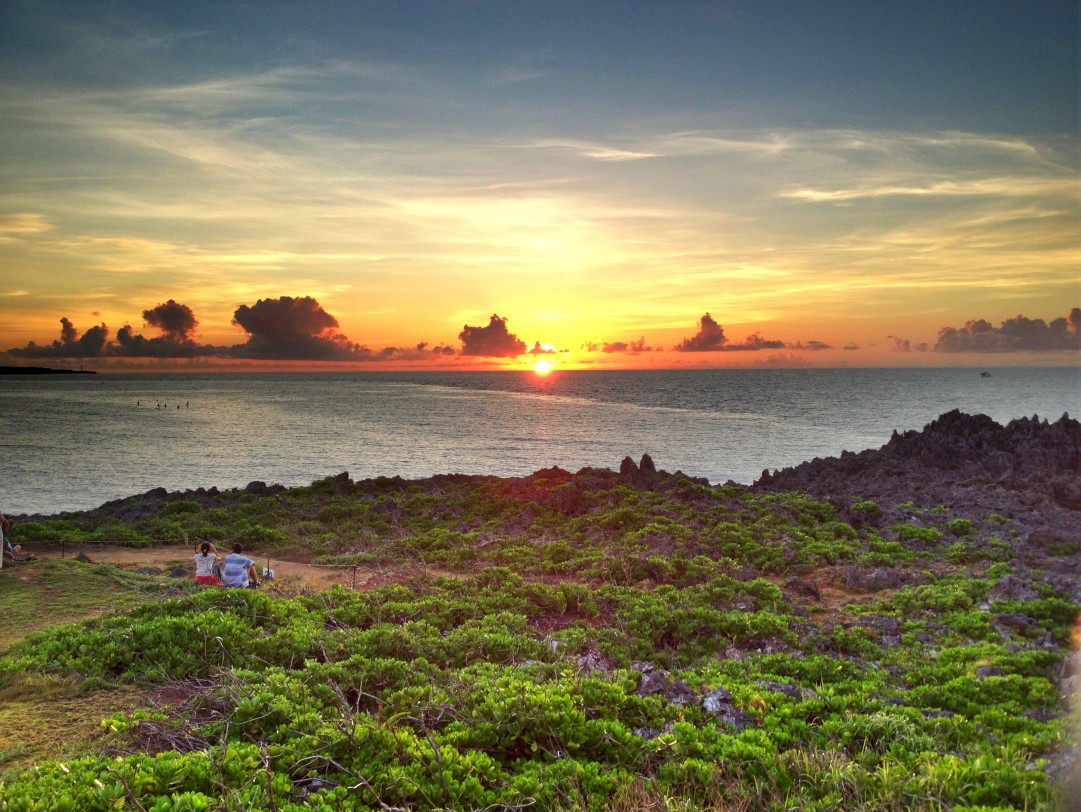 Sunset in the Okinawa Island

An average traveler or backpacker rarely chooses Japan as her destination. There are many reasons for that – Japan is an expensive country located far away from most continents, e.g. the flight from the United States or Europe takes at least 11 hours. Nevertheless, it does not mean that one should resign from seeing this beautiful country. Thanks to Globetrotter Grant which paid my flight ticket I had a wonderful chance to visit the country of cherry blossoms. 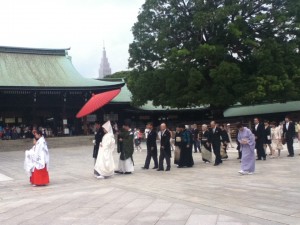 After spending 17 days in Japan I need to admit – that was the best trip of my life. It is a land of tradition and modernity, unique culture and cuisine, interesting history and wonderful people. There are people dressed in kimonos in the streets and bride and groom always wear traditional costumes at their wedding in the old temple or shrine. Many young Japanese still continue traditions of samurais and geishas. Nobody is afraid of showing the strong connection to customs and cultural heritage. At the same time, Japan is one of the most technologically developed nations. Driers for umbrellas and fully automatized toilets with computerized controls are everywhere. Japanese love improving the quality of their life with new inventions. They are very hard-working and proud of their achievements. 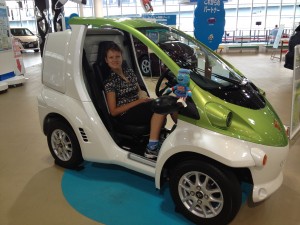 I spent my first four days in Tokyo – the capital and biggest city in Japan. Tokyo area is one of the most densely populated areas in the world. 12 million people live in the inner city area and around 34 million people live in the metropolitan area. Tokyo has multiple districts and each of them has its own center. I stayed in the district called Nishi Kasai and I was hosted by Kevin from CouchSurfing network (www.couchsurfing.org). On my first day in Tokyo I was very lucky to see traditional Japanese wedding in the oldest Shinto shrine in the city – Meiji Shrine located in Harajuku district. 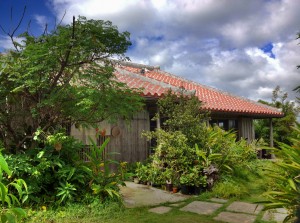 Tokyo has a lot of tourist attractions to offer: world-famous Shinto shrines and Buddhist temples, showrooms of latest industrial inventions, world-class restaurants, and busiest crossings in the world. One of the most exciting visits was a trip to Toyota showroom where I got to ride the latest models of street cars and electric cars. Some of them look very futuristic and one could also ride the racing car simulators there (after reading all safety instructions explained by attentive staff).

The Beach nearby Onna, the West coast, Okinawa

After my stay in Tokyo I decided to go to Okinawa Island, famous for its fauna and flora, unique cuisine and tropical climate. Okinawa Island is the main tourist destination for Japanese in summer; therefore, renting a car there without a prior reservation is impossible. Moreover, one needs to have an International Driving Permit to drive around the island. Otherwise, the police give a ticket. Putting this aside, one needs to admit that Okinawa is the best snorkeling destination in Japan. The Island surrounded by fringe coral reef systems provides plenty of diving and snorkeling opportunities. One of my favorite was the place called Blue Cave which was shown to me by my CouchSurfing host Zdenek who is in his postdoc program at Okinawa Institute of Technology and Science. In the Blue Cave not only did we see plenty of colorful corals, but we also swam among schools of fish. 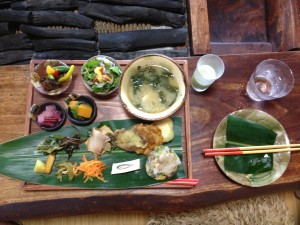 Apart from organizing our multicultural CouchSurfing dinners (Zdenek hosted 3 other people at the same time, Czech, Korean and Chinese), we also got to try traditional kaiseki meal at Café Garamanjyaku – a hidden gem and award-winning restaurant. Its renewed local vegetarian chef uses Okinawan produced (often from her own garden). Kaiseki meal consisted of miso soup and side dishes which together were arranged in an artsy manner and tasted delicious. Kaiseki meal is analogous to Western haute cuisine. 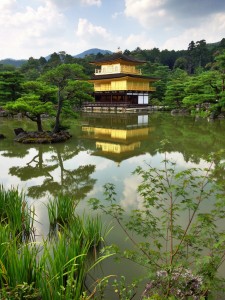 After the stay in Okinawa I headed back to Honshu Island, just in time to attend the Atomic Bomb Memorial held in Hiroshima on August 6, 2013 to commemorate 70,000 people killed by the explosion of the “Little Boy” bomb. Then, I took a Shinkansen bullet train to Kyoto which I think is the most beautiful city in Japan. In Kyoto I was hosted by Hamid, a PhD student at Kyoto University who does his research on earthquake engineering. He advised me which attractions to visit and what to expect in certain districts of Kyoto, with Gion being the most interesting one. Definitely, one of the sightseeing highlights was the Golden Pavilion of Kinkaku-ji Temple, a UNESCO World Heritage Site. 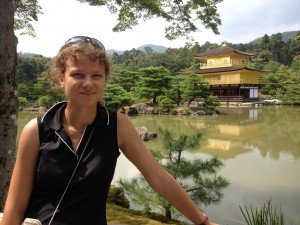 Me in front of The Golden Pavilion of Kinkaku-ji Temple, Kyoto

Originally it was built as a retirement villa for Shogun Ashikaga Yoshimitsu in the late 14th century and later it got converted into a temple by his son. Then after in 1950 the temple got burnt down by the young monk who thought that the gold covering the building was unnecessary luxury at the times of poverty and famine in Japan. Later, the temple was rebuilt and now it is the most important tourist attraction in Kyoto.

I also visited nearby Ryoan-ji Temple with its famous Zen garden, one of the best examples of Japanese “dry-landscape” style. This garden does not have trees, ponds, hills or streams. The only thing it has is the ascetic set of fifteen rocks which sit on a bed of white gravel. The main meditation lesson which one is supposed to learn while meditating in this garden is the fact that knowledge, studying and wisdom are supposed to bring us contention. Not money, not fame, not goods, but just pure happiness from knowing more than we knew before. 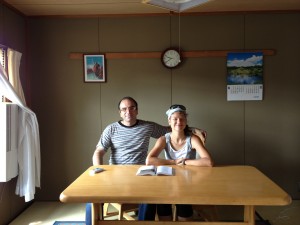 Hamid, CouchSurfing host, and me, Kyoto 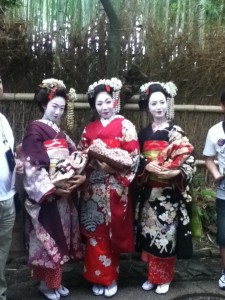 On my last day in Kyoto, I was very lucky to meet three geishas in the Sagano Bamboo Forest in the Arashiyama district. Their heavily embellished outfit and white-painted faces distinguish them among the crowds. Everybody wanted to have photo with them and at the end they had to escape from the crowds!

After Kyoto I went for one night stay in the Buddhist monastery located at the Mt. Koya-san (at around 3000 feet above sea level). The possibility to stay one night with Buddhist monks and meditate and chant with them was one of the most unforgettable experiences in my life. 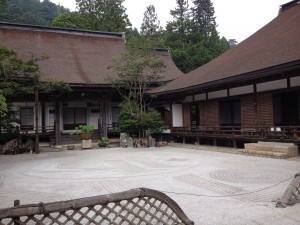 One needs to adjust to the monastery routine. Arrival needs to happen before 3 pm, then, after check-in guests are encouraged to join 5.30 afternoon meditation. At 6.30 pm there is a dinner call and everybody eats vegetarian kaiseki meal. The time between 7.30 pm and 9.30 pm is dedicated to the hot bath in the communal onsens. Next day, all wake up at 6 am and head for Buddhist chanting and morning meditation, and at 7 am everybody eats traditional vegetarian Buddhist meal which does not contain any products from animals. Although all activities need to happen according to schedule and there is no flexibility left, one enjoys the peace and serenity of the place very much. I need to admit that during my 24-hour stay in the monastery I achieved deep state of relaxation. 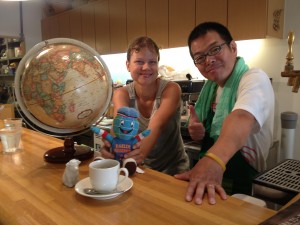 My next stop was a town of Nara, an ancient capital city with beautiful Nara Park, historical temples and hundreds of deer wandering around. I was very lucky because on this night I stayed in Nara there was a huge candlelight festival happening called Nara To-Kae Lantern Festival. All sites were illuminated with tens of thousands of hand-lit candles which created fairytale like atmosphere. 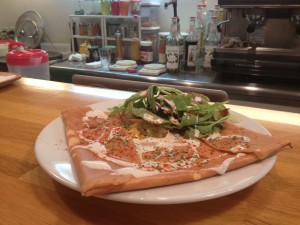 In Nara I was also hosted for a first time by a Japanese CouchSurfer – Hiro – the owner of the Café Wakakusa. Hiro was a very nice person with a lot of CouchSurfing experience (he hosted 100+ people over last two years). Hiro prepared a very tasty French-style crepes for me and let me stay overnight at the second floor of his café. It such an exotic thing to say that you have couchsurfed in a café! So I am very glad I had a chance to do that. 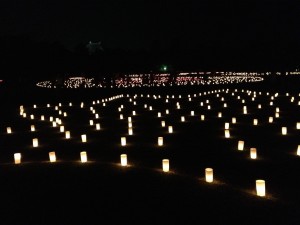 Finally, at the end of my trip I went to Hakone, a famous mountain resort located around 45 miles from Tokyo. It is the place where majority of people from Tokyo go to rest from hustle and bustle of the big city. It is also the place where one is supposed to see Mt. Fuji on the clear day – usually in winter, not in summer though (a slight disappointment which I had to face). Still, it was worth visiting to explore the Fuji-Hakone-Izu National Park and beautiful Lake Ashi. 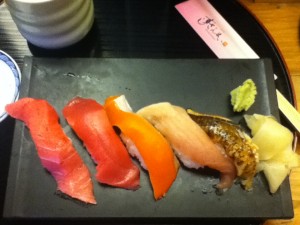 Two last days in Japan I spent in Tokyo. I visited the places I did not have a chance to see on my first days in Tokyo. I went for a traditional Japanese Kabuki theater performance in the newly renovated Kabuki-za (the best place to see Kabuki play in Tokyo) and I visited two restaurants I always wanted to go: Sushi Zanmai and Gonpachi. The first one is famous for its fresh and delicious sushi and its accessibility – 24/7 for 365 days per year. The second one set the stage for a famous killing scene in the “Kill Bill” movie. The scene was not shot there, however, the design and interior was an inspiration for that scene. After that happened, the restaurant got visited by many official guests and celebrities (including Quentin Tarantino and Johnny Depp).

So at the end, I would like to share with you with some reflections on Japanese people and Japanese society:

All in all, the trip to Japan was a great adventure and a great learning experience. What I got to see and experience in Japan exceeded my expectations and encouraged me to go back to that country again. The culture, cuisine, traditions and architecture are so unique and so unrepeatable that it is truly awe-inspiring to see how they endured through all the centuries of historical turmoil and Westernization. I did not have enough time to visit northern part of Honshu and Hokkaido; therefore, I still will keep my dream of coming to Japan again. But what I tell my friends right now should be an advice for every traveler: make a trip to Japan your lifetime goal and be sure you go there some day – you will never regret it.