Is this real life? 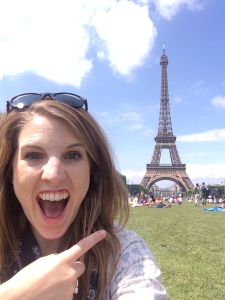 
If you had told me a year ago that this would be my new introduction – to friends of friends, to prospective law schools, to fellow Americans abroad – I would have laughed out loud. Where was THAT job description on career websites and in catalogs of future employers? Nowhere. And yet, here I am. In France. Gazing out my window at the French Alps. For a living (well, for a year anyways).

The decision to turn down my job offers, to scrape together as much of a travel fund as I could, and to move across the globe was one of the boldest, scariest, most rewarding things I have ever done. (Albeit, slightly less scary with the Globetrotter Grant sitting in my checking account just begging to be spent.) 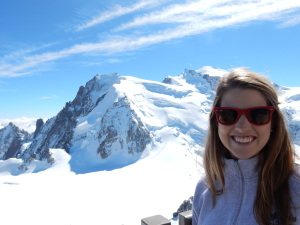 Equipped with a suitcase and a passport, I set out on an adventure to become acquainted with the world: its food, its architecture, its history, its people. I dared to travel alone to places that I had only read about, to learn a language I had rarely ever heard. I’ve since spent weekends standing at the foot of the Eiffel Tower, a stone’s throw from The Mona Lisa, across the street from the Tower of London. I’ve stared face to face with the highest peak in Europe, with the most beautiful pair of designer French high heels, and with a mouth-watering, mile-high, vanilla soufflé. I’ve dabbled in Italian, failed miserably at German, and attempted, time and time again, the dreaded “r” words in French. (Emphasis on the “attempted.”)

And that’s just been the first five months… 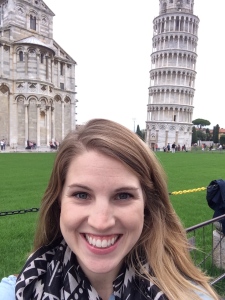 Many au pairs find themselves abroad restricted by the modest salaries and limited time off. I, on the other hand, have been able to use the Globetrotter Grant to pay for all of my transportation to and from other areas of Europe. I have spent my weekends in places all over the map, using my salary to pay for activities, food, and housing, and using the Globetrotter Grant to eliminate the most expensive variable: just getting there.

With each interaction, experience, and conversation, I have been led to question, to re-evaluate, and to understand… not just others (as I had expected) but also myself (not so expected). I have felt myself transition from a pure and utter fascination with all things new – three hour French lunches! What a splendid idea! – to desperately craving the comforts of the familiar – ALL I WANT IS WHATABURGER. IS THAT TOO MUCH TO ASK?! And eventually, I have found myself in an entirely new realm of adaptation: one where I can accept and appreciate a cultural identity without losing sense of my own. Nachos made with French cheese? You betcha!

I may have only reached the mid-point of my travel journey, but I already recognize an evolution of self, a maturity, and a greater ability to truly define what I want out of life. So, what began as a simple hiatus from the real world – a check box of places to visit and a chance to throw caution to the wind – has taken a slightly more introspective turn. Then again, as it turns out, it’s a lot easier to ponder the world – and your place in it – while staring at a snow-capped mountain and devouring a baguette.

Here’s a glimpse at some of my weekend trips and favorite places. Naturally, I’ll start with…

Paris, to me, will always be the day that I spent just walking around in the rain, peering at the city from under the protection of my umbrella. Or the entire afternoon that I sat on the Champs du Mars munching on cheese and meats and baguette…only to be surprised, mere hours later, by the July 14th celebration of fireworks and live opera. I could go on for hours about the tiny cafes that ruined my diet or the carefully crafted itinerary I didn’t follow, but the moral of the story is that Paris is its most beautiful when it’s unexpected and unplanned. If you go, don’t forget to leave a day solely for the purpose of sipping coffee on café terraces or hunting down your own favorite bread store (you’ll certainly have plenty to choose from). 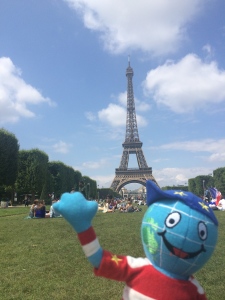 Globie at the Eiffel Tower

My favorite things (so far)…
Area to Get Lost – The Marais
The old Jewish Quarter of the city that is now known as a hot spot for Parisian shopping on weekends.

Tour – Fat Tire Versailles Bike Tour
I’ve done all 3 of the Fat Tire Tours in Paris. This one was, by far, my favorite. If you go to Versailles on your own, you can easily miss out on a real understanding of the grounds, its history, and the stories behind it all. This is well worth the money.

Market – Marche Aux Puces
This market is hard to get to but worth the trip. This is the antique market of antique markets. Supposedly, a lot of Hollywood stars make the trek to buy home furnishings and knick-knacks. I found everything from a vintage Chanel purse (which I sadly could only afford to drool over) to artwork to wood furniture.

Beautiful Architecture – Sacre Coure, Saint Chappelle, and Opera Garnier
The Sacre Coure is my favorite church in Europe (thus far). Saint Chappelle was built for the relics from the Crucifixion of Christ, such as pieces from the Crown of Thorns (though they’re now in Notre Dame) and is covered ceiling to floor in stained glass. The Opera Garnier is HIGHLY underrated; the ceiling alone is one of my most beautiful things in Paris.

Cool Streets for Snacking – Rue Cler (Ecole Militaire metro stop) and Rue Montorgueill (Sentier metro stop)
The Champs Elysees is a MUST, but these are also worth wandering down if you have the time. Rue Cler is just a tiny street of cafes and bread/wine/cheese shops. It’s near the Eiffel Tower, so it’s also a great place to get picnic supplies for a day on the Champs de Mars. Rue Montorgueill is slightly farther afield but with a less touristy crowd…and directly next to one of my favorite food spots (Frenchie to Go).

Museum – Orsay
The Louvre is a good check box to hit, but this museum is exponentially easier to manage and is FILLED with originals of Monet, Manet, and other impressionist painters from France.

Brunch – Madam Popo (in The Marais)
They bring you fresh chocolate chip cookies instead of bread to start your meal. Need I say more?

Lunch – L’as du Falafel (also The Marais) and Frenchie To Go (Sentier metro stop)
Frenchie is one of the most talked about restaurants in Paris and almost IMPOSSIBLE to get a reservation at. Next door is “Frenchie to Go,” the affordable version of the super-hyped restaurant. Different food. Same chef. Way cheap. 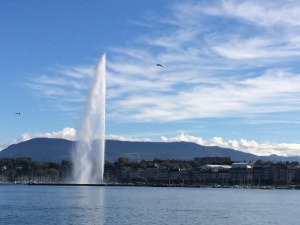 Snacks – Le Loir dans la Théière (in the Marais; their pie is heavenly), Berthillon ice cream (on Ill St. Luis), Angelina (several locations but they just re-did the one by Tuileries Garden; get hot chocolate!), Lauduree (famous for their macaroons)

Geneva
I spend most of my days in and around Geneva, as it’s the closest large city to my teeny, tiny French town. While you could easily spend your day wandering around the U.N.’s Palace of Nations or hitting up the old town area (both highly suggested), I often prefer a view of Lake Geneva, a nice meal, and a good cup of coffee.

London and Oxford
For me, the U.K. has always been a distant, childhood dream. When I was 3 (or something of the sorts i.e. too young to actually remember how old I was), my mom took a trip to London. She returned with Paddington Bear and an Oxford t-shirt, and although little Alli had NO IDEA where London was or what The University of Oxford meant…I knew that my mom had just returned from the opposite corner of the earth, that she had traveled to somewhere I had previously never even known existed and that she had brought back stories of her adventures (and presents, let’s not forget those). 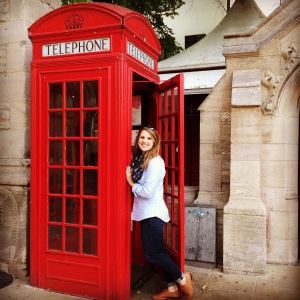 So, you can only imagine what it was like, some 20 years later, to step off a plane IN THAT EXACT LOCATION…some things, there just aren’t words for. I spent the majority of my time in London playing “tourist” – not that there’s anything wrong with that. 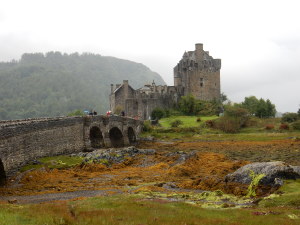 Edinburgh, Glasgow, and the Scottish Highlands
As I meandered through cobbled streets, listened to bagpipers – some good, some not-so-good – munched on Scottish hog roast, and hopped in and out of Edinburgh castle, the Queen’s Palace, the Scottish National Museum…and a billion cashmere shops, I could feel the pulse of Scotland. It had never been high on my list of travel destinations, and I ended up there out of pure curiosity and convenience. Eh, it’s close. Why not? I spent a few days in Edinburgh, a week driving through the Scottish Highlands, and I rounded out my trip in Glasgow. To date, it’s probably one of my favorite trips I have ever taken. 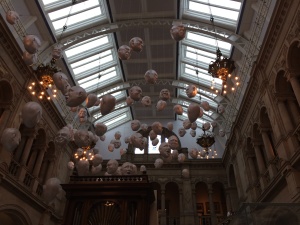 Don’t Miss (In Glasgow) – Catch an indie flick at the Glasgow Film Theatre, take a walking tour from the Glasgow School of Art

Don’t Miss (In the Scottish Highlands) – Renting a car and just driving around, The Isle of Skye, Lochness (the search for Nessie continues…) 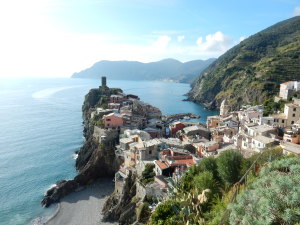 The Cinque Terre, between Pisa and Genoa, Italy

Cinque Terre, Florence, and Venice
When I look back on my trip to Italy, all I can manage to think about is the food: whole baked fishes, creamy risottos, truffles and mushrooms and pasta. To say that I all I did in Italy was eat would be a pretty fair statement. My hiking excursions in the Cinque Terre, my art museum explorations and wine tours in Florence, and my shopping in Venice were all used to fill the gaps in between the next planned meal. Not that I’m complaining. If you go for no other reason, go for the food. There’s a reason it’s considered some of the best in the world. 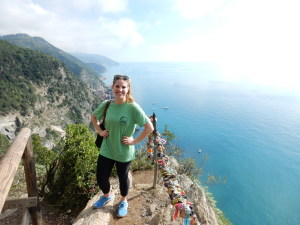 Hiking in the Cinque Terre

Don’t Miss (In Cinque Terre) – Hiking in between each of the towns (you’ll need to buy a pass for the popular Blue Trail but the others are free), taking a boat to any cities you missed or as a way to get to your desired starting point (the view of the cities from the water is breathtaking), Trattoria Tres Torri (in Portovenere, probably the best baked fish – or maybe the best meal – I have ever had), Billy in Manarola (talk about fresh seafood, I hand-picked my own fish) 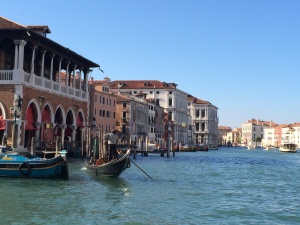 Don’t Miss (In Florence) – A guided tour of the Uffizi Gallery (well worth the extra money, probably one of my favorite things I did), a quick trip out of town for a wine tour in the Chianti region, Santa Croce (the burial place of many, many, many famous Italians), Trattoria Al Trebbio (I’ll never look at lasagna the same way again), 13 Gobbi (another FANTASTIC family restaurant)

Don’t Miss (In Venice) – Rialto Market, a trip to the nearby islands of Murano and Burano, the fish risotto at Da Primo in Burano 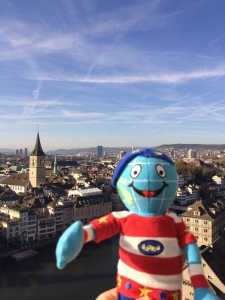 Zurich
My previous knowledge of Switzerland centered primarily on cheese and chocolate, but the country – and particularly the financial hub of Zurich – has so much more to offer. The cities, even the large ones, are easy enough to navigate on a quick weekend trip, and the landscapes, food, and pristine city centers are worth at least that much time.

Don’t Miss – Neumarkt (a restaurant in the old part of town with a purely Swiss German menu that is only a slight sidestep from the main street), the FREE city walking tour (they meet outside of the Paradeplatz square multiple times a day), Hot Chocolate at Café Schober (in the old town), Window shopping on Bahnofstrasse (the most expensive street in Europe), climbing to the top of the towers in Fraumuster church for an excellent city view

A Few Other Places in France 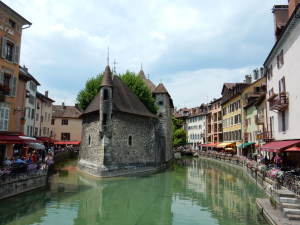